Bron Jenssen was an Airs Corps photographer on 51 missions

A letter from the chairman of the Joint Chiefs of Staff arrived unexpectedly this spring and plunged Bron Jenssen, an 86-year-old World War II veteran, back into the nightmarish realm of combat he had spent six decades trying to leave behind.

There was that indelible flash in which he witnessed the blur of German fighter planes fire upon and destroy a B-24 on the trailing edge of his squadron. In the time it took him to blink, the bomber was obliterated.

"The ship was gone, vaporized just like that," Jenssen recalled, saying "pfft" while throwing open his hands. "All 10 crew members were killed instantly."

Jenssen had shared very little with anyone, not even his wife, about his experiences as a 19-year-old airman and photographer in the 758th Bombardment Squadron of the Army Air Corps.

The patriotic attaboy letter from Adm. Mike Mullen -- which commended Jenssen for "bravery and great sacrifice" -- helped set free long-guarded memories at a time when Jenssen's advanced years are beginning to take a toll on his recall and mental faculties.

"It's been very good for him to talk about this," said his wife, Wilma. She also credited a newfound interest in talking about the war with his joining a discussion group at the Stratton VA Medical Center where he shares stories one day a week with other veterans, mostly from the Korean War.

Jenssen completed 51 combat missions and flew 308 hours over enemy territory on bombing sorties during the Allied invasion of southern France and across Europe from an air base in Italy. It was his job to perch beside an open window in subzero temperatures shooting documentary film footage of the bombing targets, before and after a strike, as well as briefing air commanders on what he captured on camera.

He never once was given a photo credit.

Six times Jenssen's B-24 Liberator was shot up so badly that it failed to reach its target, had to break away from the squadron and return solo to the air base for repairs at low altitude -- a big, low and slow target for flak guns.

Two different bombardiers among his plane's 10-man crew were killed by anti-aircraft fire. Jenssen's lower left leg was torn up by ground fire.

"That's why I have half a calf," he said, gripping a walker to steady himself before lifting up a pant leg to reveal a thin, withered calf muscle. "The doctors patched me up, and I was back flying again the next day."

Jenssen, a wiry Norwegian with pale blue eyes, a trim silver goatee and the scratchy accent of his native Brooklyn, was an accidental war photographer.

He graduated from the High School of Music and Art in Manhattan and was living in an artists' conclave in Greenwich Village, honing his technique as a painter, when he was drafted three months after Pearl Harbor. During basic training, he got out of kitchen duty by taking an aviation cadet test as a lark. Much to his surprise, he passed and was made a photographer because he had completed rudimentary training with a camera.

He was no Cartier-Bresson in the frigid, drafty belly of the B-24, where temperatures dropped to 35 degrees below. The bomber flew at 225 mph at an altitude of 36,000-38,000 feet with windows open so Jenssen could get a good, clear shot. "I just pointed it at the target and pushed the button," he said.

He wore a heated flight suit, gloves and socks that plugged into an electric socket. He also donned a flak helmet over his battle helmet. No food or water or bathroom facilities were on board. The flights were typically eight or nine hours, but some lasted as long as 11 hours. They were young airmen with iron bladders.

The loss of aircraft and crew members was so high that each time Jenssen and his crew returned, British soldiers who worked at the British-run airfield where he was based greeted the plane with a tray of whiskey and 10 glasses. The base saloon was a free, all-you-can-drink facility.

"We lost a lot of ships. We were getting shot at all the time," ," Jenssen said. "You could understand why guys drank a lot."

One of his most dangerous missions was the bombardment of nine oil refineries near Ploiesti, Romania, which was fueling the German army.

Fifty-four aircraft and 660 airmen had been lost over Ploiesti, which was protected by hundreds of anti-aircraft gun batteries. After more than 6,000 sorties, with a nearly 4 percent loss of aircraft, the sustained campaign managed to deprive the Germans of the steady supply of fuel essential for its planes, tanks and combat vehicles.

"That was a turning point of the war. We starved the Germans of fuel," Jenssen said.

He was discharged as a staff sergeant in 1945 at the age of 21. His fellow crew members were the same age, except for a radio operator six years older whom called "the old decrepit one." He and Jenssen are the only ones still alive from their crew.

Jenssen received an Air Medal and Distinguished Flying Cross, which he shut away in a case and rarely took out until recently. He couldn't tell a visitor which was which.

After the war, he trained at the Art Students League of New York City and moved to Guilderland 38 years ago. He worked as an art director at local public relations firms. His wife taught courses on special education as an adjunct professor at the College of Saint Rose. He continues to paint portraits and landscapes.

The couple has three children, four grandchildren and three great-grandchildren. Wilma Jenssen wife hopes that her husband will continue to record a video oral history that their son has begun.

Jenssen's attic studio contains dozens of sketches and paintings, many of which are works-in-progress. He favors sunsets and mountain vistas, soaring eagles and serene golf courses.

There is not a single war scene among them. 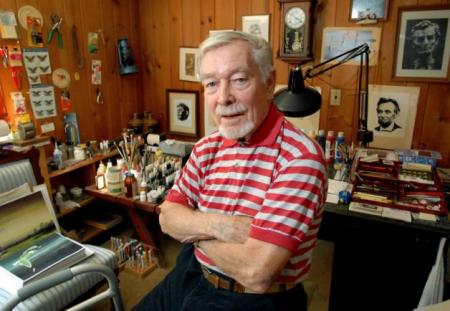 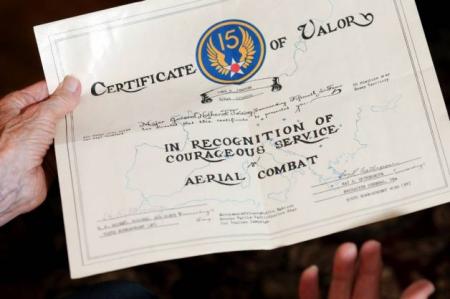 The following information on Jens Jenssen is gathered and extracted from military records. We have many documents and copies of documents, including military award documents. It is from these documents that we have found this information on S/Sgt Jenssen. These serviceman's records are nowhere near complete and we are always looking for more material. If you can help add to Jens Jenssen's military record please contact us.

Please contact us with any biographical data, pictures or other information regarding the service and life of Jens Jenssen.