I was accepted as an Aviation Cadet in the Army Air Corp. in July 1942. Went through Pre-Flight primary, Basic and Advanced Pilot Training. Received my wings and commission as a Second Lieutenant in the Army Air Force Nov. 3 1943. Trained in B24s (four engine heavy bombers).

After training I became part of a crew as Co-Pilot. Flew the Southern Route to Italy. Our crew was assigned to the 759th Bomb Sqd. 459th Bomb Group, 15th Air Force. I was later promoted to 1st Pilot after a check ride and test just before our faithful mission. I had been promoted to Asst. Operations Officer and 1st Lieutenant but my bars had not yet been presented.

We flew 26 missions before being shot down on June 16, 1944 while bombing just outside of Vienna Austria. Eight of our crew managed to bail out all over Hungary as our wounded bird lost altitude. Our Pilot in Command had been killed at the controls by flak and went down with the plane. I bailed out last and was immediately captured, beaten, tortured. I was then thrown into a dungeon at a small town. I was later moved to BuLee Tice Pins on George''s Wingsdapest and remained until the Red Cross came to visit prisoners in a humanitarian mission.

I was then moved to Stalag Luft III where we remained almost a year. As the allies (Russians) approached the camp we were forced marched through out Germany to Nuremburg then on to Mooseberg. It was a very happy day when Patton’s 3rd Army roared up in tanks and liberated us all in April 29th 1945. I had finally received my bars from the Red Cross while a POW. It will soon be 55 years since freedom. 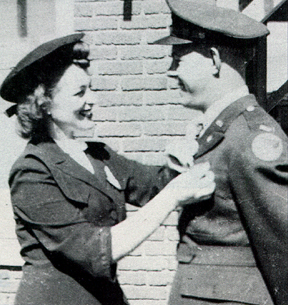 The following information on George Tice is gathered and extracted from military records. We have many documents and copies of documents, including military award documents. It is from these documents that we have found this information on 2nd Lt Tice. These serviceman's records are nowhere near complete and we are always looking for more material. If you can help add to George Tice's military record please contact us.

Please contact us with any biographical data, pictures or other information regarding the service and life of George Tice.